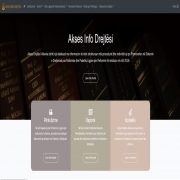 The Access to Justice Information database contains now data and documents on institutions and individuals promoted under the new Justice Reform. The data provide information on laws, decisions, reports, decision-making acts, and performance of the system. In addition to institutions, individual passports of accessible information are also created both for judges and prosecutors remaining after the vetting process, as well as for individuals appointed and promoted to the new justice institutions.  The website has just introduced also data for the wealth of the members of the High Council of Justice. The data are obtained based on the right of access to information about the declarations made to the High Inspectorate of Declaration and Control of Assets. The asset declaration data provide information about the interests and economic power of office holders and related persons. On the link below, you may access information on:

The High Judicial Council is a constitutional institution, established by Constitution after changes made in 2016 as part of the legal package for justice reform. This institution is created to ensure the independence, accountability and smooth operation of the judicial power in the Republic of Albania. The Council is composed of eleven members, six of whom are elected by judges of all levels of judicial power, while five members are elected by the Assembly among non-judge legal professionals. The High Judicial Council exercises the function of appointment, evaluation, promotion, and transfer of judges at all levels. Also, this Council imposes disciplinary measures against judges. The Council leads and takes care of the work of the court administration, except for the maintenance of the Information Technology structures in courts, which is regulated by a special decision of the Council of Ministers. The Council proposes and manages its budget and that of the courts, and informs the public and the Assembly of the state of the judicial system.

Information on the work of this institution can be accessed through Access to Justice info  http://aksesdrejtesi.al/list/1

The database includes also data about other people promoted to institutions and the justice system.  http://aksesdrejtesi.al/persons/3

Albanian Civic Society against the government’s proposed changes to the...