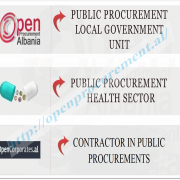 The Members of Parliament are going to vote during the state of emergency caused by the natural disaster due to COVID-19, on the April 30th parliamentary session, on a law approving an extension of the concessionary contract for Porto Romano Port in Durres.

In our opinion, this political decision of the Council of Ministers is in violation of the Law on Concessions and Public-Private Partnerships, i.e. Law No. 125/2013, and more specifically, its Article 33 “Rules for Awarding Additional Works and Services to PPP Consultancies”, whereby extensions of concessionary agreements may only be made in specific conditions, which relate to the need for the performance of works or services already foreseen by the existing agreement. Under no circumstances are political decisions and negotiations allowed for additions to, and extensions of, the scope of the concessionary agreement beyond the procurement procedure, adding to the rights and benefits of the concessionary.

In June 2015, the Albanian government signed a BOT concessionary agreement (construction, operation and transfer of Porto Romano’s property and operation right) for Porto Romano, Durres, for the processing of navigational vehicles carrying over 20 thousand tons of hydrocarbons, where the concessionary company can process hydrocarbons in depth of more than eight meters. Concessionary Agreement MBM Port  http://www.opencorporates.al/sq/nuis/L51621501S was then owned by Adriatic Petrolium Platform ltd with 97% of the capital, and Salillari shpk; ATEC srl and Mampaey Offshore Industries BV with 1% each.

The structure of owners changed in February 2019 through donations and quota purchases, with Salillari finally owning 3% of the total capital, and Adriatic Bay Investment Group shpk owning 97% of the capital. The latter is a company of a controlling package owned by Kastrati Group  http://www.opencorporates.al/sq/nipt/k21711502v, a commercial company, whose activity consists of import and export of hydrocarbons.

On February 24th, 2020, the Concessionary Company requested on the government to change the scope of the agreement, by extending it from Processing cruise vehicles that transport Hydrocarbon to processing transport means of other goods. This addition is accepted by the government within a few days, and on March 31st, an additional concessionary agreement is signed on behalf of the Albanian government through the Ministry of Infrastructure and Energy. This extension of the agreement was also passed by the Parliamentary Economy Commission and is expected to be voted by the parliament session Thursday, May 30th. Such a change in the concessionary agreement brings effects as far as shipping goods in the country and the region are concerned.

Documents of this concession include the draft law, and additional contract, which you can find in the passport of this concession under the Register of Concessions, Open Corporate Database of Albania http://www.opencorporates.al/sq/nuis/L51621501S

The change and extension of the concessionary scope is not done through competitive procedure, but simply by political will. Similarly, changes to the scope of the concessionary agreement were not associated with market research, concessionary tariff changes, investment value changes, technical studies, consultations, or any assessment of their effects.

Failure to comply with the legal requirements on the approval of concessionary contracts, and even worse, making such changes by political decisions and in times of a situation of natural disaster, is a political irresponsibility of the current ruling majority.

Concessionary contracts and Public-Private partnerships are expected to strongly affect the country’s economy and public finances in the years to come. Arbitrary decisions without legal regulation, on behalf of political decision-making, and in the absence of any procurement rules, are high-risk moments for this economic sector.

In these same days, the Albanian Road Authority, has announced a call for tenders for the construction of  the  Porto Romano Road, Durres, with a limit fund of 669 384 858 (six hundred and sixty-nine million, three hundred and eighty-four thousand, eight hundred and fifty-eight) Leke, equivalent to 5.44 Million Euros, giving priority to this port by allocating a budget from the state budget investment fund for 2020. http://openprocurement.al/en/arsh/view/id/116

AIS, an organization promoting Open Data for Albania monitors public contracts and tenders. Our work consists of structuring information and documentation of the contracting process, as well as the creation of algorithms for risk assessment during contractual procedures.

Other notes and positions on issues with public contracting during the state of emergency have been published on AIS website: http://ais.al/new/en/

An Overview of Facts and Development related with the Albanian National Theatre....
Scroll to top