Money, Government and Politics project and its activities address issues of abuse, corruption, and conflict of interest in the context of governance and politics in Albania. The program opens up and well-structures data about the wealth of high state officials, and expenditures of state institutions, concessionary corporates, and electoral spending.This process enables to track cases of nepotism, embezzlement, and conflict of interest. Access to such data increases transparency, accountability and public pressure in cases of favoritism, and embezzlement of public funds or assets. 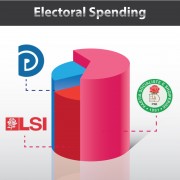 The Albanian Institute of Science (AIS), a non-governmental organization advocating transparency, good governance, and accountability, is engaged in opening data regarding electoral expenditures and financing. In addition to publishing data from the Financial Tables of Election Subjects in an Open Data format, AIS, through its Electoral Room for Electoral Reform, Money Government and Politics and Za’Lart – Make Elections Count programs, has also identified details and problems related with the electoral financing of the latest campaigns.

On 14 May 2014, AIS presented and proposed some proposals for amendments to the Albanian Electoral Law at a Technical Table on Political Party Financing, a conference organized by the Central Election Commission and supported by the OSCE Presence in Albania. The proposals address electoral campaign financing. Some of the main proposals presented at the conference and submitted in writing by AIS/Open Data Albania included:

In its latest report for the Assembly (April 2016), the Central Election Commission included a document on Recommendations for Potential Improvements of the Electoral Code 2016. The draft is intended for the Assembly and its Electoral Reform Committee, and it includes earlier proposals made by AIS Program Open Data Albania at a round table organized in September 2014 on the Registration and Control of Donors’ Conflicts of Interest. The proposals are integrated in the document section IX. Recommendations for Political Party Financing during Electoral Campaigns and regular calendar years, pages 22 and 23, points 7 and 9 of the Recommendations.

AIS, an organization that promotes Open Data Albania, thanks the Central Election Commission for institutionalizing the proposals coming from the civil society, and for the seriousness with which recommendations on electoral financing were drafted in this document addressed to the Assembly. In addition, AIS will continue to also lobby as a member of the Election Situation Room Initiative for a quality electoral law and reform for regulating the Financing of Electoral Subjects and Auditing of Electoral Campaigns.

Another effort made by AIS for contributing to fair rules of electoral financing is the court process initiated by AIS against the three largest political parties, i.e. Democratic Party, Socialist Party, and the Socialist Movement for Integration for their failure to provide real-time information about he lists and names of their electoral campaign donors, waiting for two months for Tirana Administrative Court of Appeal to set a date for the court hearing. It is the first time that a civil society project in Albania provided the public with detailed information about every transaction of the State Treasure, including the transaction date, purpose, number of invoice, and the beneficiary. Through its Open Spending Albania  portal, the Treasury Transactions, the Albanian citizens had the opportunity to understand how taxpayers’ money is spent (Where does my Money Go). In August 2014, the public was informed through the open data provided by the Treasury Transactions about several payments made by several state institutions to ABISSNET, a private company owned (on the date of transactions and contracts involving payments) by Koço Kokëdhima, and MP of the ruling majority. The transaction tables appeared on the front page of newspapers like Tema, RD , Ora News, Gazeta Shqiptarja, ABC, etc. They also became part of statuses on Facebook and Twitter of people, who have a significant role in the public debate, and finally caused some reaction by the media and by the opposition parliamentary group of the Democratic Party. A group of Members Parliamentary addressed the Constitutional Court asking for the removal abrogate of the mandate of MP Koço Kokëdhima referring to Article 70, point 3 and 4 of the Constitution. This article of the Constitution bans MPs from exercising economic and profitable activities using public money. The request of the opposition parliamentary group was also based on Articles 7 and 13 of the Rules of Procedure of the Assembly, and Article 28 of Law No. 9367, dated 7. 04. 2005, On prevention of conflict of interest in exercising public functions. The motion and lawsuit submitted by the MPs to the Constitutional Court were also accompanied by evidence, including tables and databases from our portal Spending Data Albania (page 2 and 3 under the title ‘Facts and Circumstances’).

Following several meetings of the Assembly Committee for Review of Mandates and a long court process initiated by MPs of the Opposition Parliamentary Group, today, on 9 May 2016, the Constitutional Court found the mandate of MP Koço Kokëdhima incompatible (with his activity), and decided to remove abrogate his mandate.

Since 2014, there have been dozens of media articles and declaration based on the open data provided by Treasury Transactions under the Open Spending Albania portal. This is a typical good example of how #OpenData and #OpenKnowledge can be used to control conflict of interest, nepotism, distribution of public money, abuse, corruption, etc.

The Albanian Institute of Science (AIS), a non-governmental Albanian organization continues to open data about the Treasury Transactions, Public Contracts and Tenders, Public Budget, Assets of High-Level Officials and Judges, Electoral Spending, etc., with the objective being increased transparency and civic monitoring through the opening of public data. Our projects, Money, Governance and Politics MGP, and Open Procurement, continue to build instruments for empowering citizens through information, transparency and civic monitoring by opening publican governmental data.